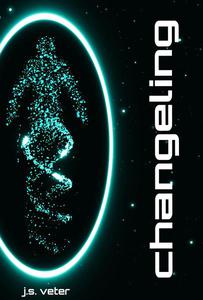 Cameron’s past refuses to stay put.

Cameron’s been receiving messages for most of his life. They appear randomly: on the back of receipts, tucked into library books, floating in the bottom of shopping trolleys.

It’s a mystery where they come from, but one thing is becoming clear: together, they spell out a warning.

Together, they’re telling Cameron to run.

Changeling is a novelette in which the everyday takes on a creepy twist. The Eyes Have It is on sale now!

Jay’s obsolete biotech Eyes are what’s holding him back. He’s not made of money, however, so when he gets a chance to upgrade on the cheap, he takes it.

We could have left him there, had Jay’s new system not gone haywire. When Jay goes in search of a good anti-virus, he’s told that what he really needs is a séance.

Jay’s system is used, you see, so the Eyes he’s got rattling around in his head once belonged to someone else. And that someone else won’t let Jay get on with his life until he takes care of a little unfinished business.

The Eyes Have It is a humourous, slightly gruesome novelette set in the near future. Available as a paperback or an ebook. Life in The Bestiary Pet Shop is very interesting. The rats put on a circus at 10, midnight, and 2 pm. The goldfish practice synchronized swimming. The mice are interested in modern dance. The birds have begun their own parliament, and Bertie the crow gives lectures on such wide-ranging topics as Meditation for Moulters and Living With Humans.

Six wants more than a life in the shop. Her Talented brothers and sisters have been sold to families of their own. Six hopes that once her Talent makes itself known that she, too, will find a place to call home.

But Six is getting older and her Talent remains hidden. A new litter of puppies will be arriving at the shop soon, and once they do, no one will be interested in buying Six.

Then one night, the shop door is left unlocked.

Six is a middle-grade urban fantasy about friendship, taking action, and finding your place. Available as a paperback or an ebook.

“You have a real affinity for animals. Your descriptions and the way you get inside their heads are amazing. I really enjoyed this story.” — Julie All seventeen-year-old Jazz Fischer wanted for graduation was a ticket to England. It was a battle convincing her father, but she did it, and now she is on her own in Jolly Old.

And she’s just been hit by a motorcycle. She’s hurt, but David, the man who was hit with her, cannot walk. It’s up to Jazz to find help for them both. Luckily, there is a house not far down the road.

What is her fault, however, is what happens to her cousin. And when Jazz’s father decides it’s time to come clean about something that’s been kept from her for years, everything disintegrates.

A holiday in England seemed the perfect way to practice being grown up. But for Jazz, practice is over. Something is coming.

Can’t you feel it?

Gateway is a YA urban fantasy about the perils of independence and taking responsibility. Available as a paperback and an ebook.